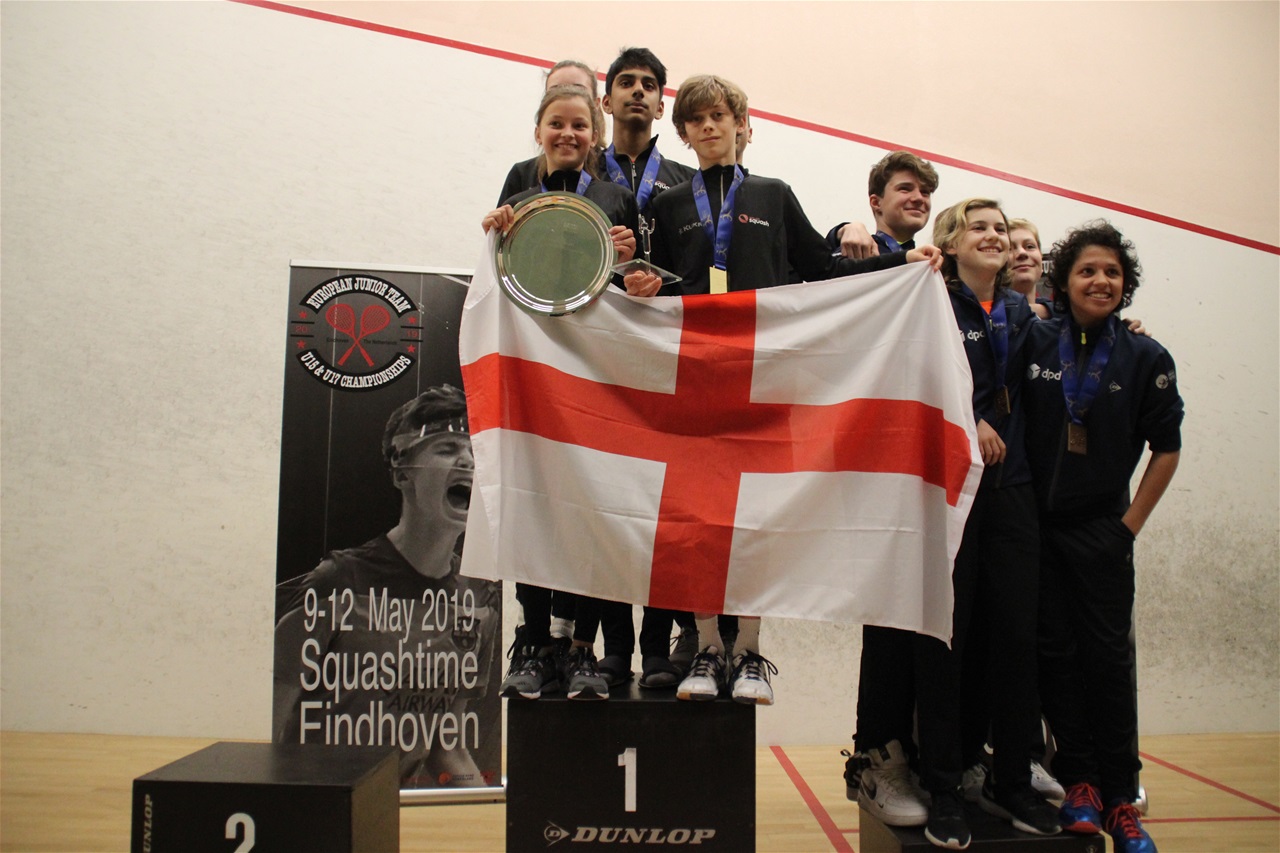 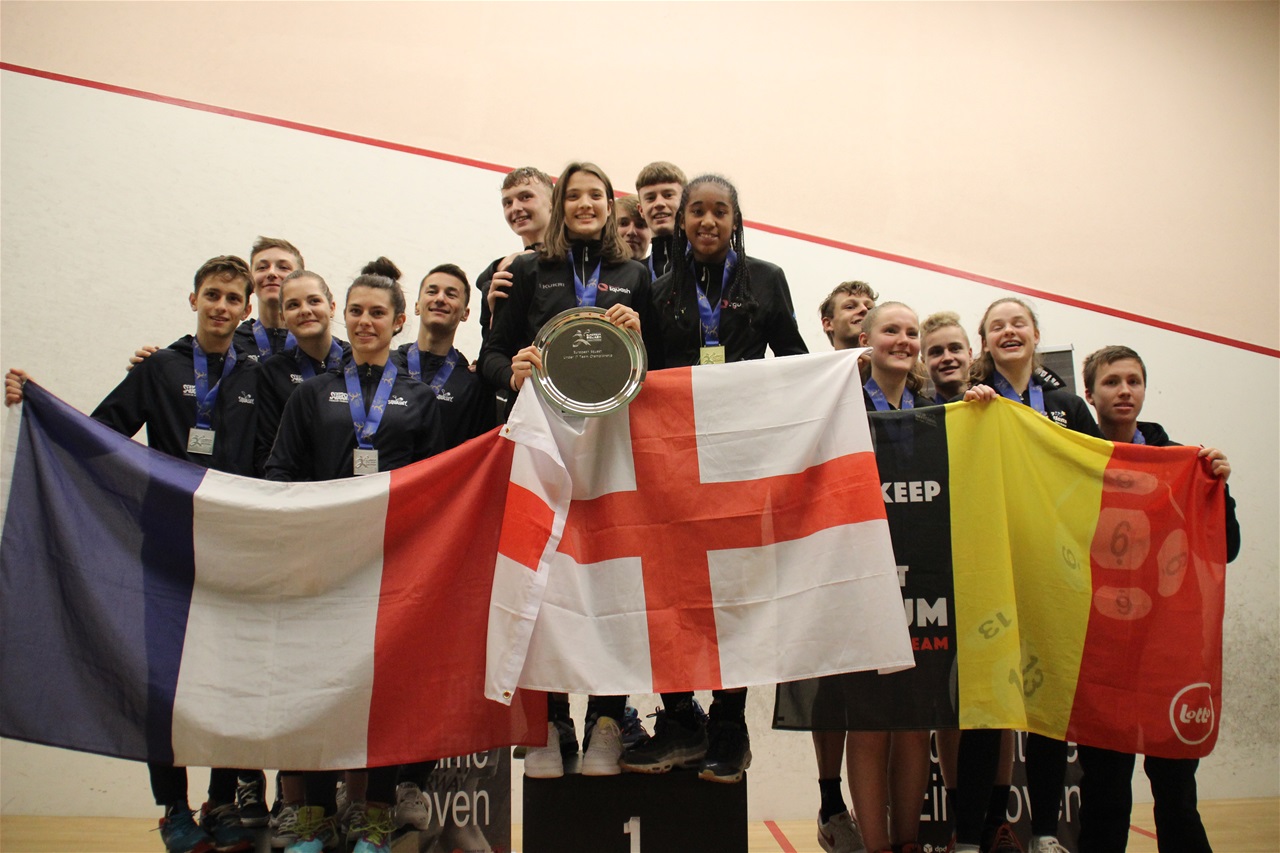 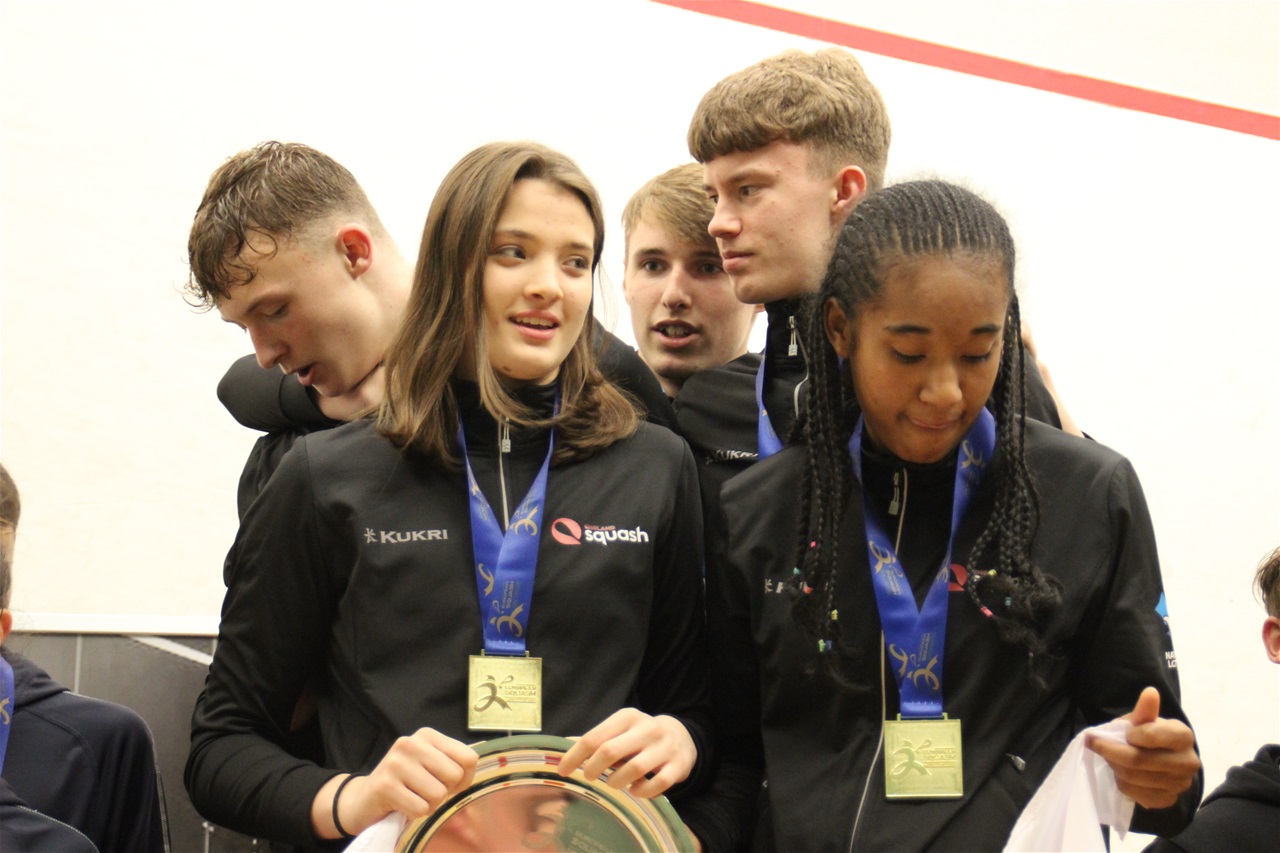 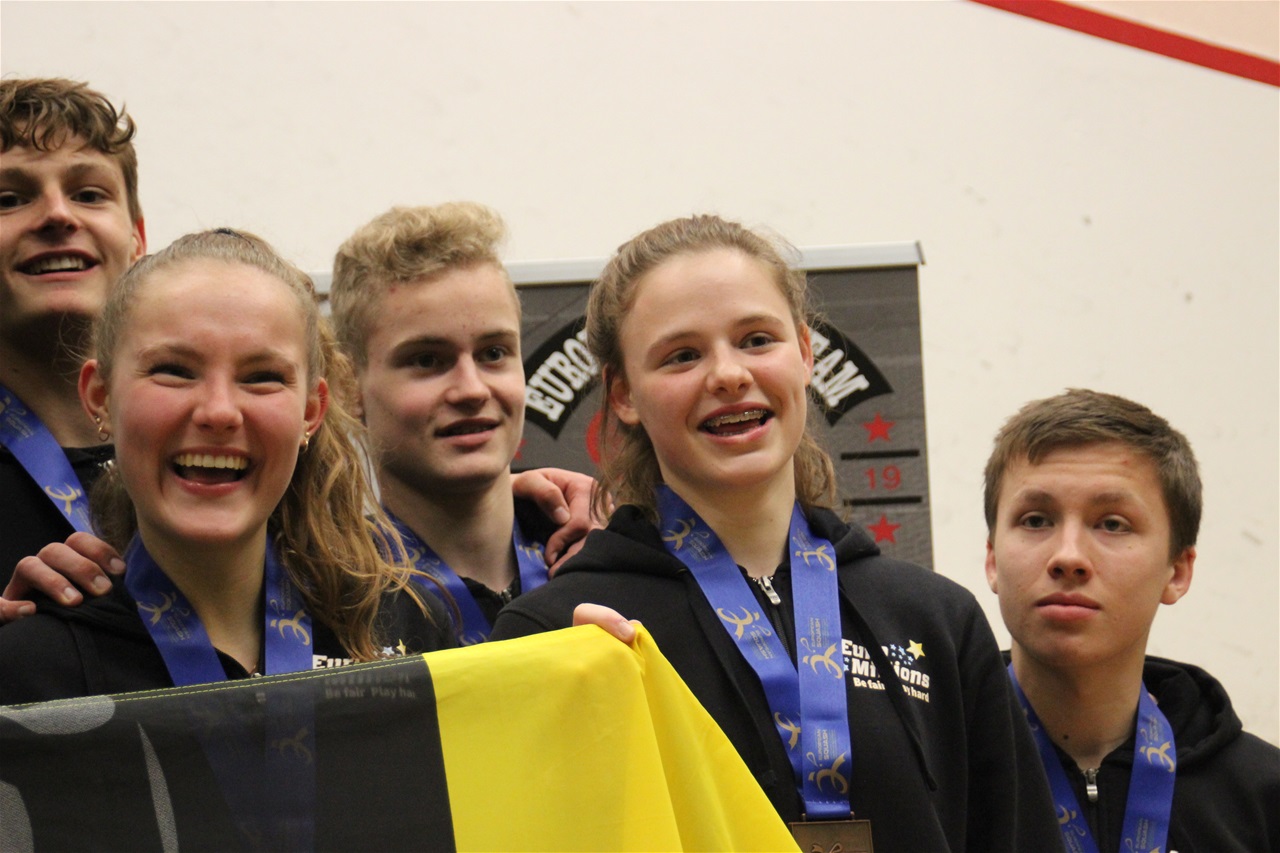 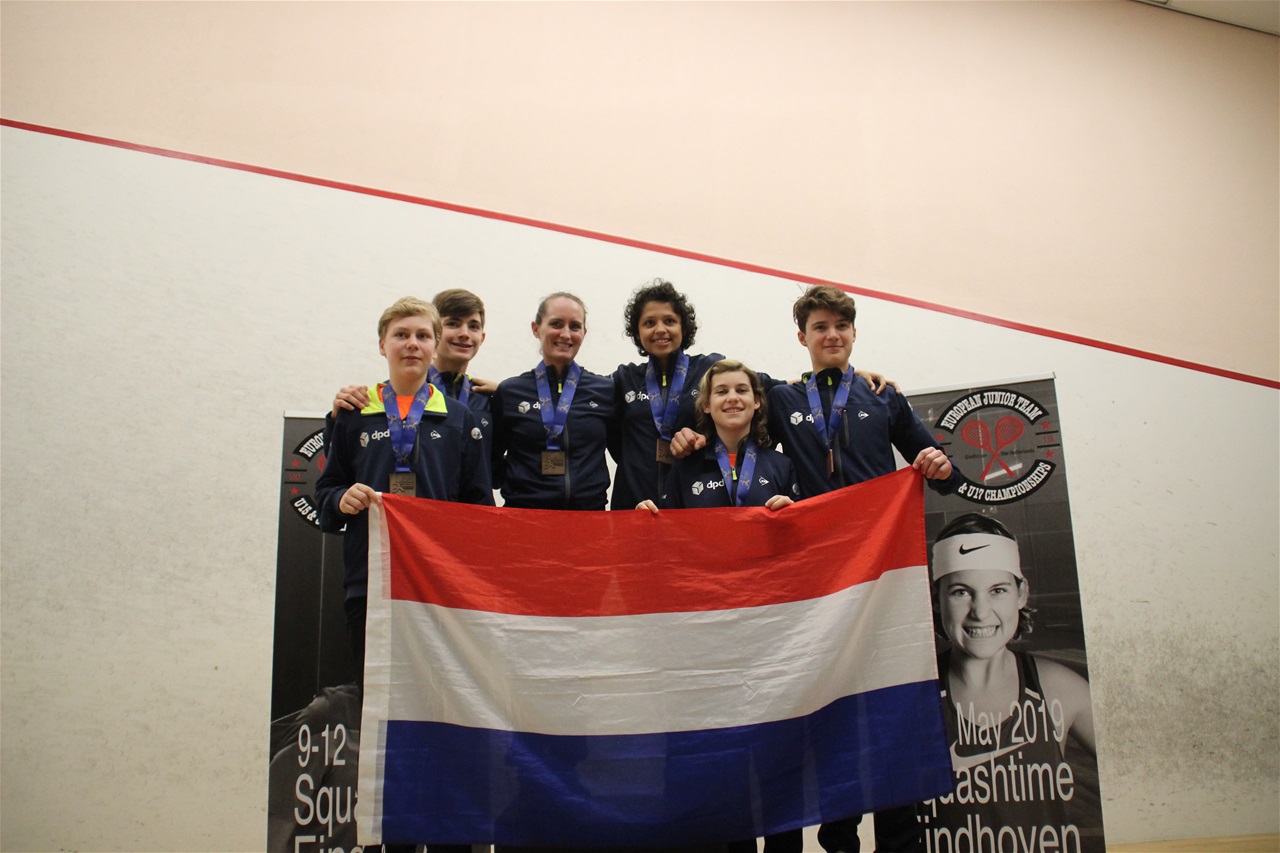 England wins the European Championships U15 & U17

The final day of the European Junior U15/U17 Championships has come to an end. Time to look back to the tournament which was held in Eindhoven, the Netherlands.

England managed to reach the final and faced the surprise of the tournament Ireland. The order of play was 2-1-3, which meant that Dylan Moran started against England number 2 Yusuf Sheik. Moran showed real strength and powerplay and took the lead 2-0. However Sheik fought back into the game and got back to 2-2. In the fifth game Moran took the lead again with 8-4 up. Sheikh again recovered and managed to win 11-9 in the fifth. 1-0 for England. Denis Gilevskiy equalized the match with his won over Jonah Bryant 3-0. Emma Bartley and Sophie Thomas played the final match. Bartley was too strong and won 3-0. England has won the Euro Championship U15. For place three it was home country the Netherlands who were too strong for Wales. Sam Gerrits took the lead with his 3-0 win over Joshua Davies. Rowan Damming then played against Daniel Lewis. He managed to win 3-1 and got Holland the third place.

After the Under 15 win the English had another final to play. This time they faced France. The English team have won the European Under 19’s with a few players of the same team as the under 17. Therefore England was the favorite for this game. Ben Smith stared off well and won in three games from Baptiste Bouin. Sam Todd then won in four from Paul Gonzales. The third match dint need to be played as England already became the European Champion under 15. For place three the Czech Republic played against Belgium. In the first game the Czech Republic took the lead. Karim Farrag won from Marat Benoit. Thimi Christiaens then surprised Marek Panacek. After 2-1 down Thimi managed to win 3-2. Marie Amelie then place the decider against Eliska Jicisnka, she lost the first but recoverd and took the following three games. Belgium won 2-1 and where the proud number three of the European Junior Under 17.

For the full results please check the link. 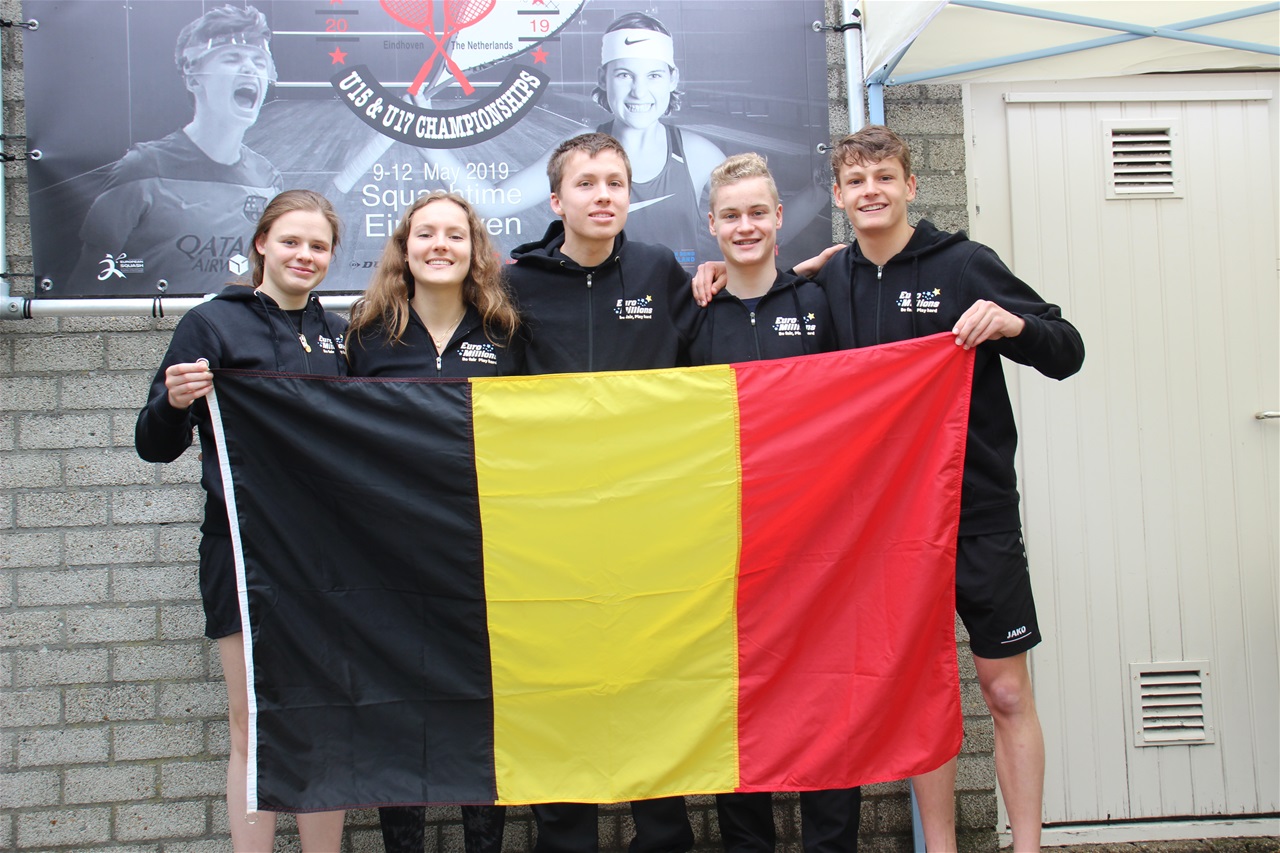 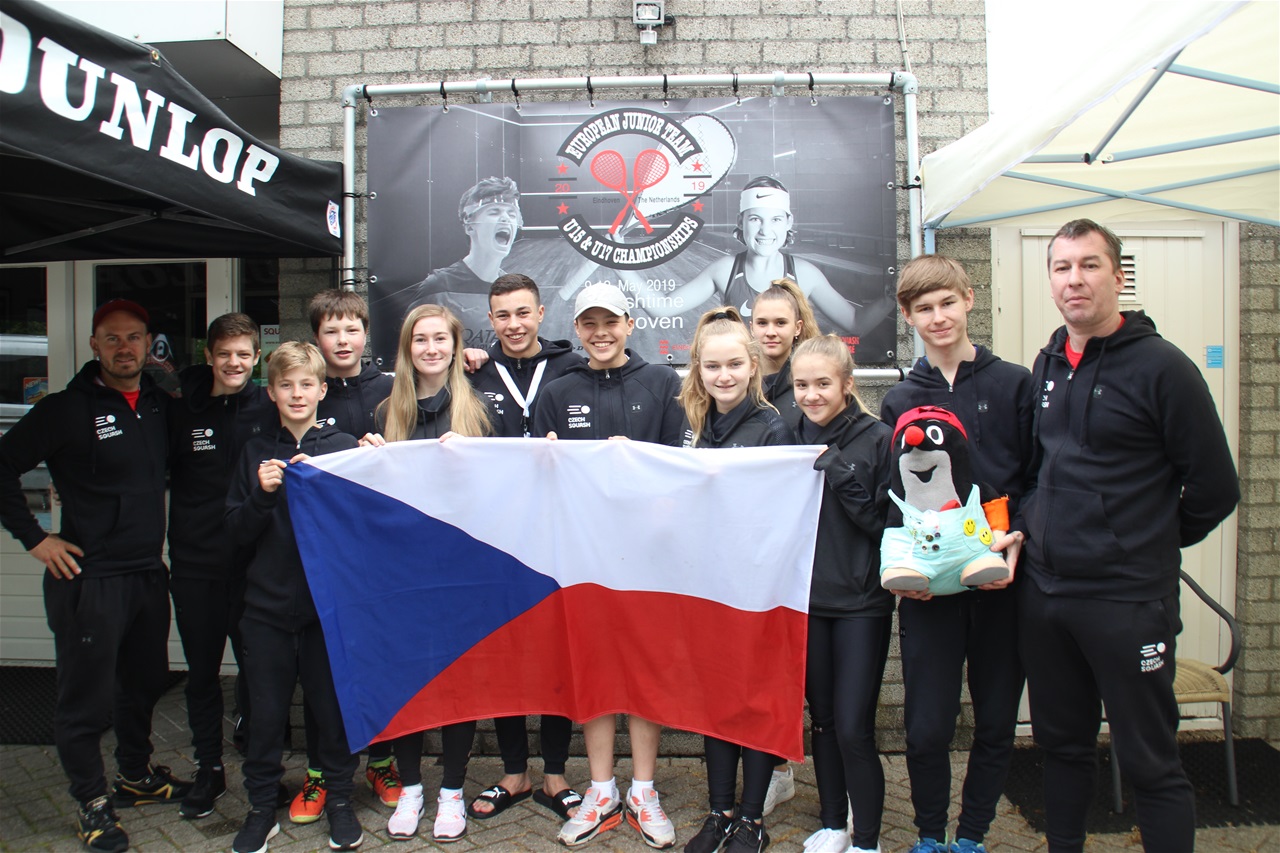 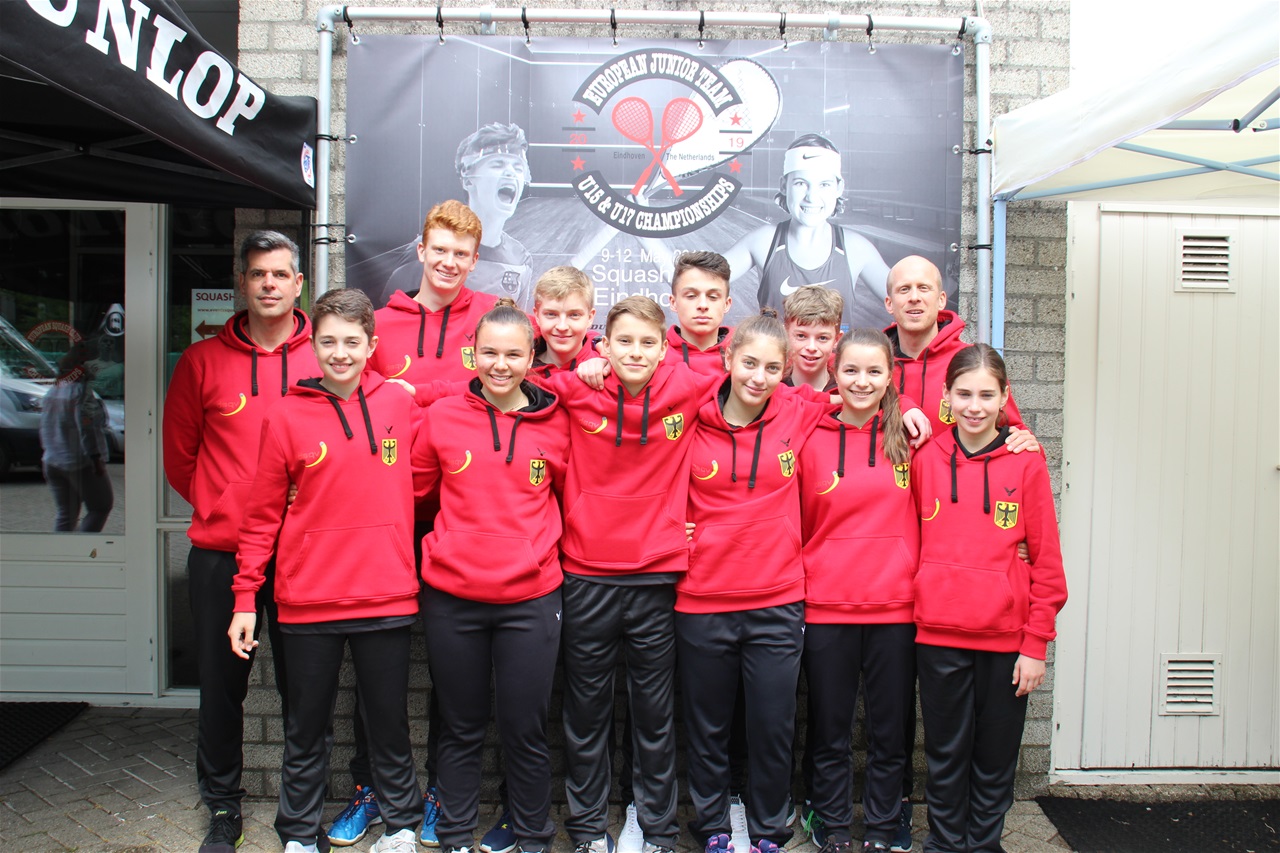 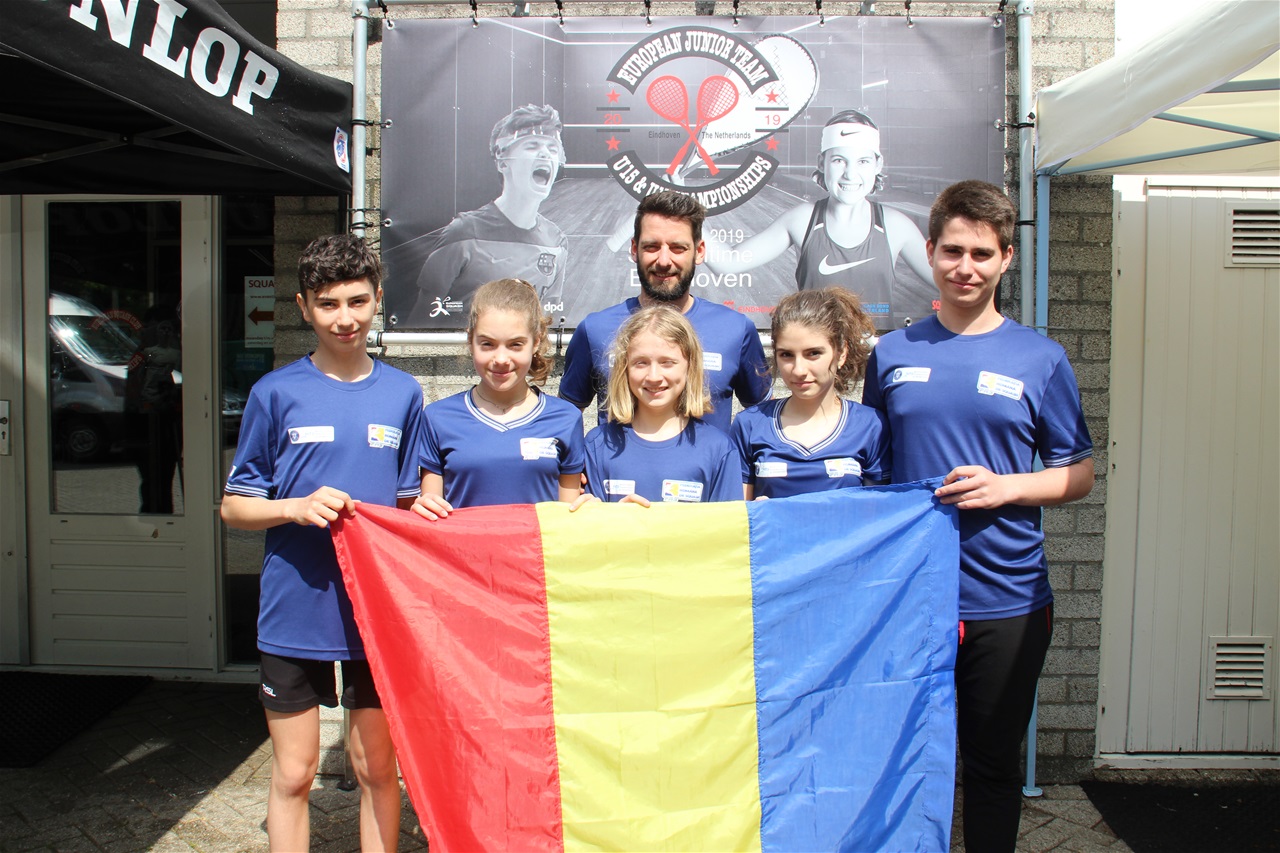 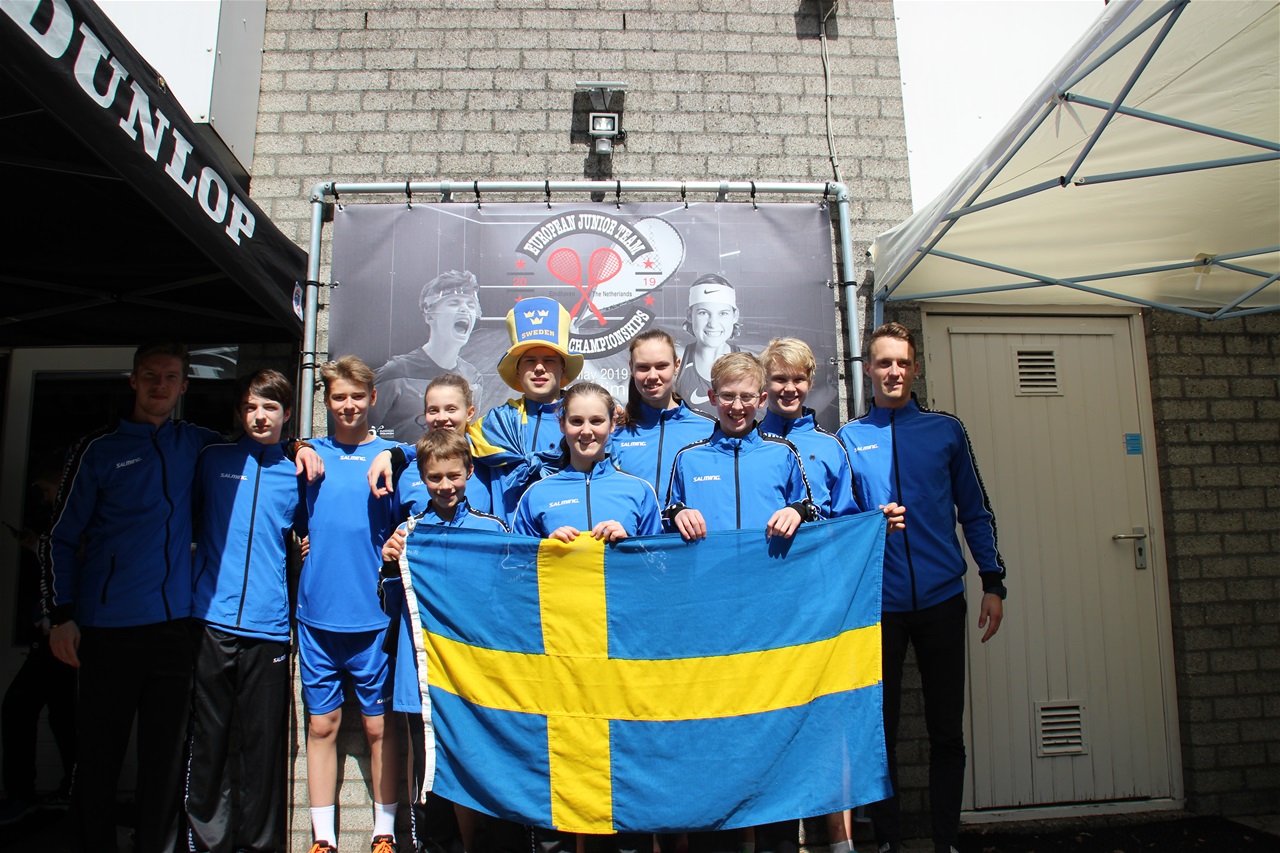 England was the first team to reach the final. In the quarter final they faced Scotland. Only Kyle Penman managed to win a match from England. But it wasn’t enough to keep the English from the Semi finals. In the Semi finals they played against the Netherlands who managed to win 2-1 from Spain. In the first game Rowan Damming almost surprised Jonah Bryant. Bryant was leading 2-0 but Damming fought back and came to 2-2. The final game went to Bryant 11-4. The other matches where for the English team. England will play the final against Ireland. Ireland keeps on surprising, after their win over the Netherlands yesterday they won from the Czech Republic in the Quarters and Wales in the Semi finals. Wales also surprised they had a very strong quarter final. After two matches they already decided the game against number 2 seed France. Now the Irish play England in the final. The Netherlands will play Wales for place number three. The plate final will go between Ukraine and Switzerland. Both teams managed to win all their games today.

In the Under 17 England again reached the final. They dint lose a single game in the quarter final against Switzerland and against Belgium in the semi final. Belgium managed to reach the semi finals over Spain. The number 6 seed Spain, Thimi and Marat pushed the Belgians to the top 4. In the other semi final it went between the numbers 3 and 4 of the tournament. France faced the Czech Republic. France won from Germany and the Czech Republic from Hungary. In a exciting semi final it all game down to the final match between Maceo Levy and Karim Farrag. Farrag started well and took the first game but dint manage to push trough. Levy took over and won the following 3 games 3-1 to France. They will face England in the final. Belgium will play the Czech republic for place number three. In the plate final the home country the Netherlands will play against Poland they will decide for place number 9. Follow or visit SquashTime Eindhoven and support your team! Entrance for the European Championship is for free. As spectator you are able to see the future talents live in action! If you are not able to travel to the event then you are able to follow the center court matches on the livestreaming. On all the other courts there is Livescoring of all the matches.

Almost every seeded country managed to reach the quarter finals. Teams will have to finish first or second in their pool to reach the quarter finals. Scotland managed to surprise. As seeded number 10 they have won from number 7 seed Switzerland. In the final game of the pool they have won. Rory Richmond and Kyle Penman made it happen for the Scottish. They now face number 1 seed England. The other quarter finals are between the Netherlands and Spain, Ireland and the Czech Republic and Wales and France.

In the Under 17 we had two ‘unseeded’ countries who managed to reach the quarter finals. In Pool D Poland and Germany played the final game against each other as number 12 and 13 seed. Both countries have won over number 4 seed Ireland who did not managed to reach the quarters. It all came down to the final match between Dennis Igelbrink and Jakub Gogol. The score in matches was 1-1 and so the final game had to make the decision. The two boys made it a real battle with a score of 2-2 and went to the fifth. Dennis Igelbrink managed to win with 12-10 and got Germany in the Quarters. In Pool A there was also a deciding match. Hungary (9) versus Wales (8). Hungary won and managed to reach the Quarters over Wales. They face the Czech Republic. The other quarter finals are between England vs. Switzerland, Belgium vs. Spain and France vs. Germany. Follow or visit SquashTime Eindhoven and support your team! Entrance for the European Championship is for free. As spectator you are able to see the future talents live in action! If you are not able to travel to the event then you are able to follow the center court matches on the livestreaming. On all the other courts there is Livescoring of all the matches. 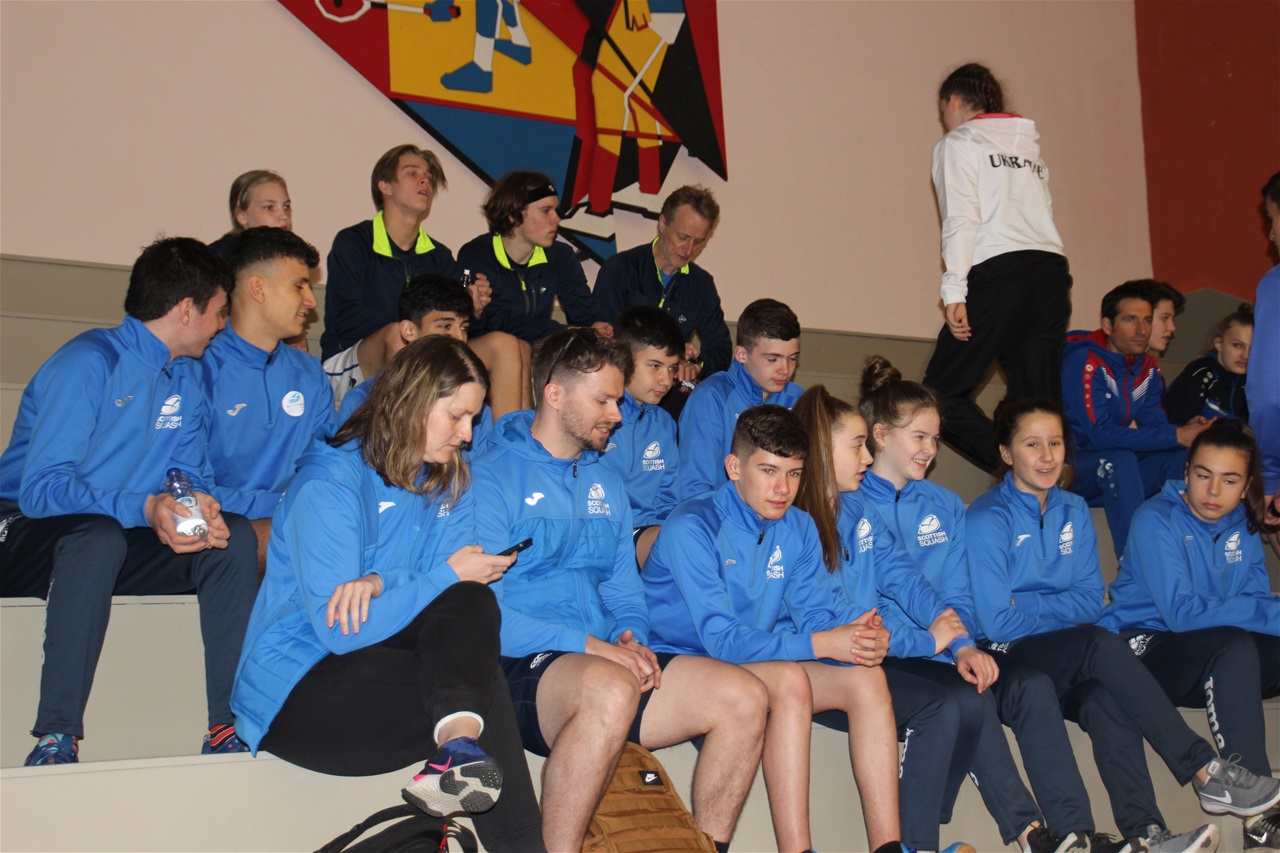 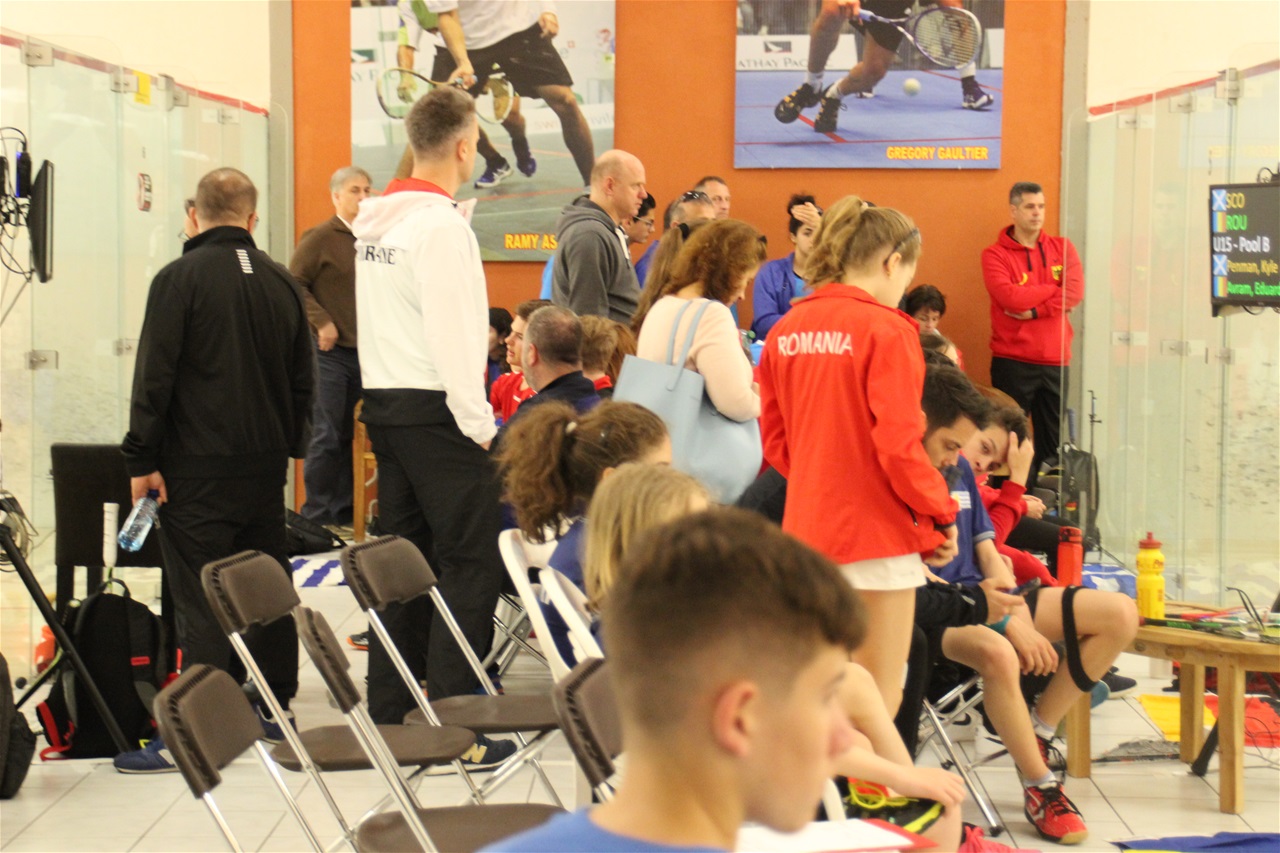 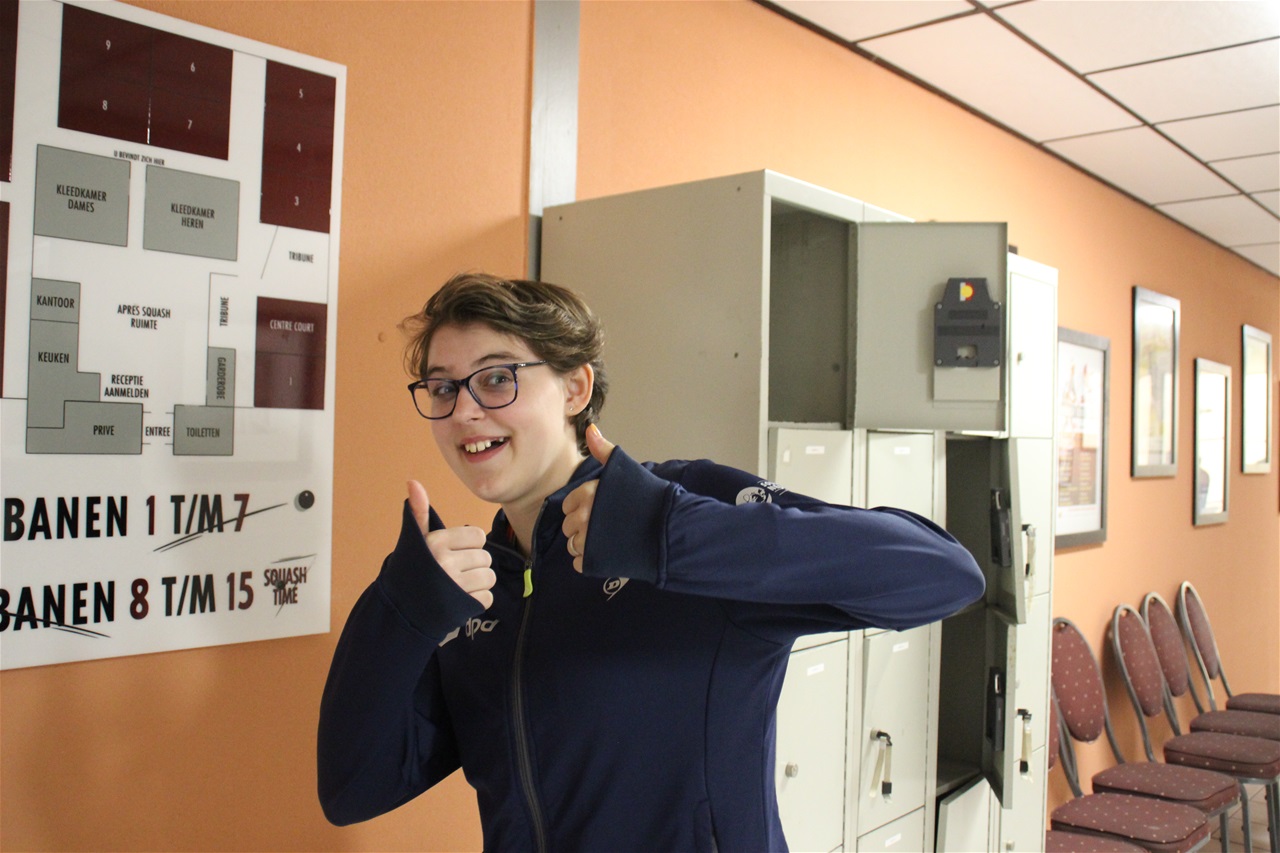 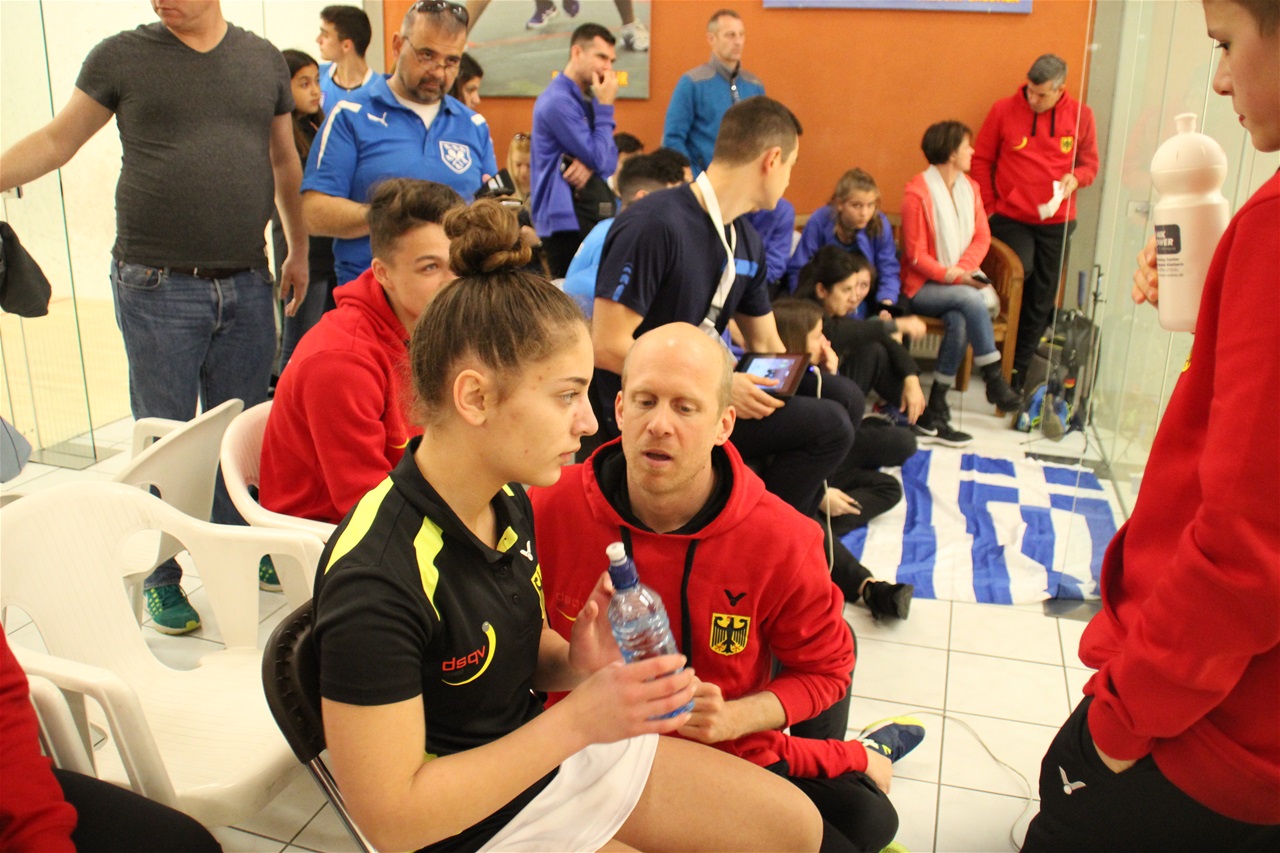 The first day of the European Junior U15/U17 Championships has come to an end. 19 teams are participating in the U15 category and 20 teams for the U17. The event is organized by the Dutch Squash Federation and Squash Time Eindhoven. After the European Club Championships there is another European Championship in the south of Holland.

No big surprises on the first day of the event as the top seeded countries (England, France, Netherlands, Czech Republic) managed to win their matches. However Russia scored the first small upset, as 17th seed they managed to beat number 9 seed Belgium 2-1. Unfortunately for Russia the where not able to surprise again later today, Wales was too strong for the Russians. Tomorrow the teams will play their final matches of the pools to decide which teams will make it into the quarter finals.

Under 17 The biggest upset of the day was in the Number 12 seed Poland managed to win from top 4 seed Ireland. Jakub Pytlowany and Jakub Gogol managed to win from Sean White and Omar Wahed. Tomorrow Poland will face number five seed Spain. Will they be able to surprise again? Ireland needs a win from Spain to be able to reach the quarter finals. Same as for the Under 15 the teams will play their final matches of the pools to decide which teams will make it into the quarter finals.

Follow or visit SquashTime Eindhoven and support your team! Entrance for the European Championship is for free. As spectator you are able to see the future talents live in action! If you are not able to travel to the event then you are able to follow the center court matches on the livestreaming. On all the other courts there is Livescoring of all the matches. 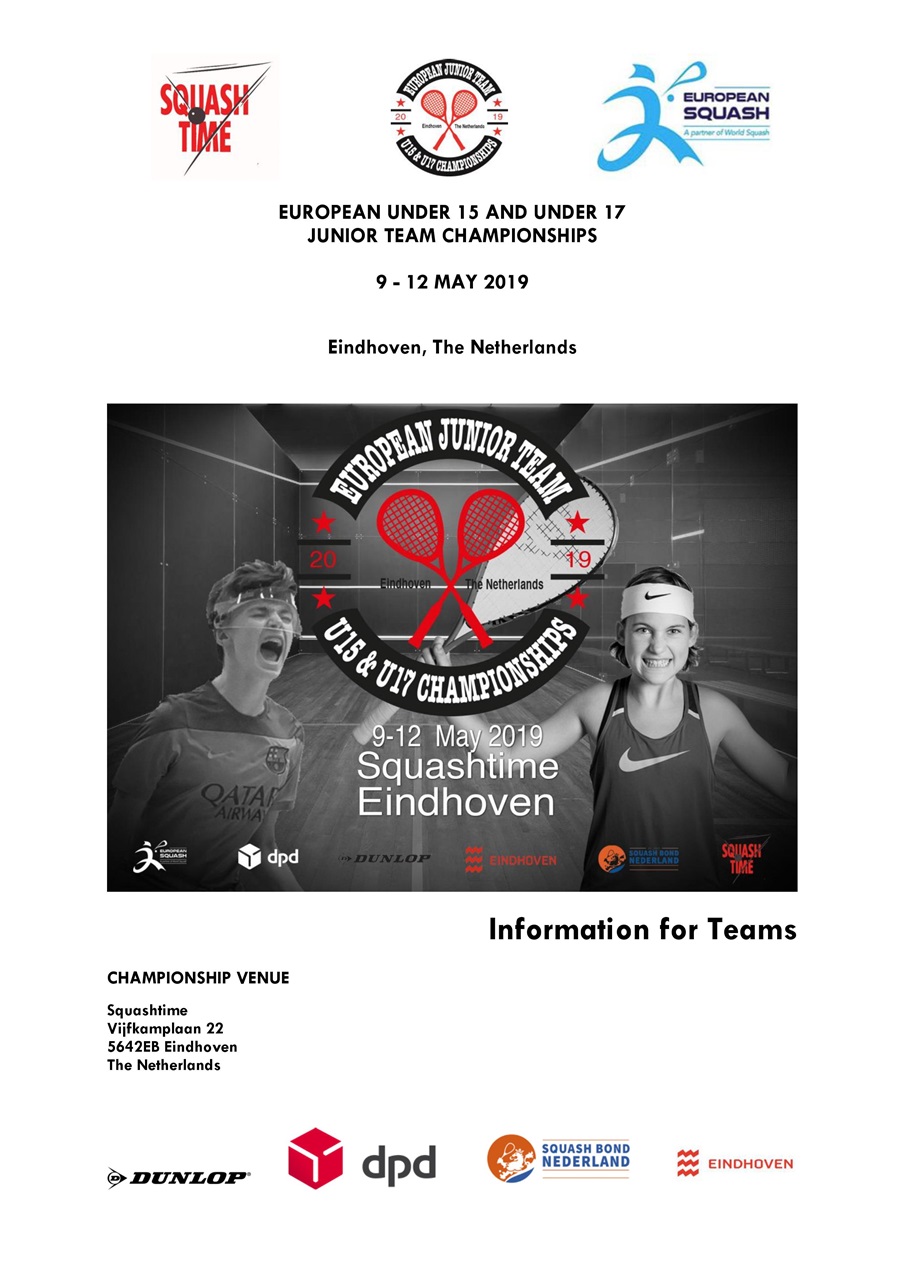